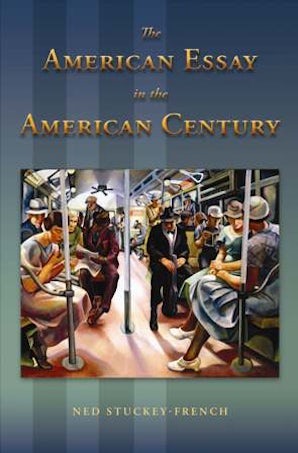 About This Book
In modern culture, the essay is often considered an old-fashioned, unoriginal form of literary styling. The word essay brings to mind the uninspired five-paragraph theme taught in schools around the country or the antiquated, Edwardian meanderings of English gentlemen rattling on about art and old books. These connotations exist despite the fact that Americans have been reading and enjoying personal essays in popular magazines for decades, engaging with a multitude of ideas through this short-form means of expression.
To defend the essay—that misunderstood staple of first-year composition courses—Ned Stuckey-French has written The American Essay in the American Century. This book uncovers the buried history of the American personal essay and reveals how it played a significant role in twentieth-century cultural history.
In the early 1900s, writers and critics debated the “death of the essay,” claiming it was too traditional to survive the era’s growing commercialism, labeling it a bastion of British upper-class conventions. Yet in that period, the essay blossomed into a cultural force as a new group of writers composed essays that responded to the concerns of America’s expanding cosmopolitan readership. These essays would spark the “magazine revolution,” giving a fresh voice to the ascendant middle class of the young century.
With extensive research and a cultural context, Stuckey-French describes the many reasons essays grew in appeal and importance for Americans. He also explores the rise of E. B. White, considered by many the greatest American essayist of the first half of the twentieth century whose prowess was overshadowed by his success in other fields of writing. White’s work introduced a new voice, creating an American essay that melded seriousness and political resolve with humor and self-deprecation. This book is one of the first to consider and reflect on the contributions of E. B. White to the personal essay tradition and American culture more generally.
The American Essay in the American Century is a compelling, highly readable book that illuminates the history of a secretly beloved literary genre. A work that will appeal to fiction readers, scholars, and students alike, this book offers fundamental insight into modern American literary history and the intersections of literature, culture, and class through the personal essay. This thoroughly researched volume dismisses, once and for all, the “death of the essay,” proving that the essay will remain relevant for a very long time to come.
Authors and Editors
Ned Stuckey-French (1950-2019) is coauthor of the eighth edition of Writing Fiction: A Guide to Narrative Craft, the most widely adopted creative writing text in the U.S., and coeditor of Essayists on the Essay: Four Centuries of Commentary.
Praise For This Book

“Stuckey-French maintains that the essay is more than a teacher’s tool; it is interactive, ambitious, and locked in its time and culture. The American Essay in the American Century probes the essay’s past as a means to consider its present and future: how it has formed us, and why; how it has changed; and what it continues to for us personally and culturally. As a reflection of humanity in action, the essay has never been strictly cozy, political, or unvaried. Stuckey-French establishes the ‘resilience and…essence’ (159) of the essay by parading its ability to march forward through time, creating closeness and connection wherever the reader or writer may be.”—Journal of American Culture

“A splendidly researched and admirably written study of a largely unknown segment of American literary history. Stuckey-French makes a compelling case for the ways the evolution of the personal essay both shaped America’s middle class and was in turn shaped by it.”—Robert Atwan, series editor of The Best American Essays

“Eloquently written and perfectly argued, The American Essay in the American Century provides, through careful analysis and through example, a cogent reminder about the value and the pleasure of nonfiction prose. Always insightfully attuned to the cultural politics negotiated by the American essayist as he or she constructs ideal readers and idealizes the authorial position from which to address them, Ned Stuckey-French deftly examines the history of the essay in American culture. This is a smart, artful discussion of an important American art form.”—Alan Nadel, author of Containment Culture: American Narratives, Postmodernism, and the Atomic Age and, most recently, Television in Black-and-White America: Race and National Identity

“I came to Ned Stuckey-French’s The American Essay in the American Century expecting a lucid rendering of the essay as an essential twentieth-century form. I got that and much more. In a splendidly elegant style that E. B. White himself would admire, Stuckey-French opened my mind and even my heart to the rich literary rewards of the essay and to its enduring importance in human discourse. This is an inspiring book, an important book.”—Robert Olen Butler, author of the Pulitzer Prize–winning A Good Scent from a Strange Mountain 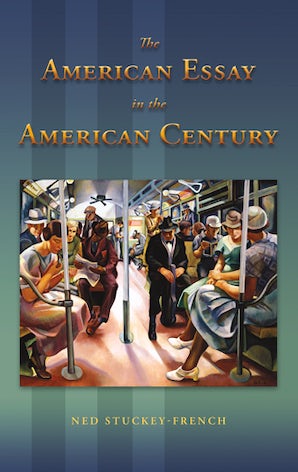