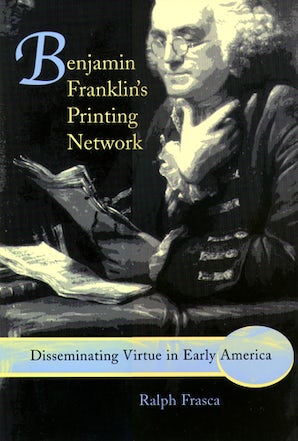 About This Book
In Benjamin Franklin’s Printing Network, Ralph Frasca explores Franklin’s partnerships and business relationships with printers and their impact on the early American press. Besides analyzing the structure of the network, Frasca addresses two equally important questions: How did Franklin establish this informal group? What were his motivations for doing so?
This network grew to be the most prominent and geographically extensive of the early­ American printing organizations, lasting from the 1720s until the 1790s. Stretching from New England to the West Indies, it comprised more than two dozen members, including such memorable characters as the Job-like James Parker, the cunning Francis Childs, the malcontent Benjamin Mecom, the vengeful Benjamin Franklin Bache, the steadfast David Hall, and the deranged Anthony Armbruster.
Franklin’s network altered practices in both the European and the American colonial printing trades by providing capital and political influence to set up workers as partners and associates. As an economic entity and source of mutual support, the network was integral to the success of many eighteenth-century printers, as well as to the development of American journalism.
Frasca argues that one of Franklin’s principal motivations in establishing the network was his altruistic desire to assist Americans in their efforts to be virtuous. Using a variety of sources, Frasca shows that Franklin viewed virtue as a path to personal happiness and social utility. Franklin intended for his network of printers to teach virtue and encourage its adoption. The network would disseminate his moral truths to a mass audience, and this would in turn further his own political, economic, and moral ambitions.
By exploring Franklin’s printing network and addressing these questions, this work fills a substantial void in the historical treatment of Franklin’s life. Amateur historians and professional scholars alike will welcome Frasca’s clear and capable treatment of this subject.

Authors and Editors
Ralph Frasca is Associate Professor of Mass Communication at Marymount University in Arlington, Virginia. He is the author of The Rise and Fall of the “Saturday Globe” and American War Reporting: The Mexican-American War.
Praise For This Book

"A marvel, both of diligent research and of Franklin's fertile and opportunistic imagination."—Books & Culture
—

"A well-researched and engaging study of Franklin's contributions to early American journalism and should appeal to a broad audience. It is a valuable addition to the literature on Franklin and to journalism in the colonial era."—The South Carolina Historical Magazine

"Frasca's welcome book shows just how Franklin made himself into a printing empire, and stresses (just as Franklin would have wanted) how it was done as part of his effort at improving humanity."—The Times of Acadiana

"Ralph Frasca's book surprises and delights. Frasca takes us into a part of Franklin's world that has been often studied, his world of print, but not with an eye to the ways in which Franklin operated within a complex network of printers to pursue his quest for personal success and the dissemination of virtue."—Journal of the Early Republic 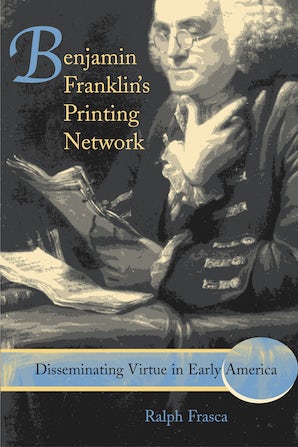