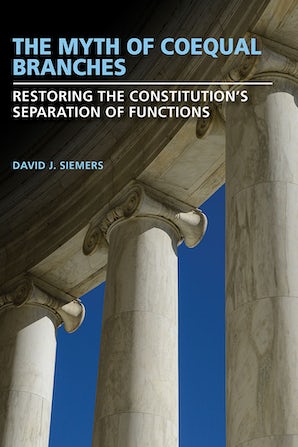 About This Book
The idea that the three branches of U.S. government are equal in power is taught in classrooms, proclaimed by politicians, and referenced in the media. But, as David Siemers shows, that idea is a myth, neither intended by the Founders nor true in practice. Siemers explains how adherence to this myth normalizes a politics of gridlock, in which the action of any branch can be checked by the reaction of any other. The Founders, however, envisioned a separation of functions rather than a separation of powers. Siemers argues that this view needs to replace our current view, so that the goals set out in the Constitution’s Preamble may be better achieved.
Authors and Editors
David J. Siemers is a Professor of Political Science at the University of Wisconsin–Oshkosh and the author of four books, including Presidents and Political Thought. He lives in Oshkosh, Wisconsin.
Praise For This Book

“This book takes on a ubiquitous topic in original and useful ways. It ought to have a substantial impact on how we think about the separation of powers in the United States and lead us to better appreciate how our constitutional scheme does and should work.”—Keith Whittington, author of Constitutional Construction

“The functional notion of the separation of powers has never been developed fully and clearly in one book. The fact that Siemers mixes this with an outstanding assessment of the contemporary consequences of our misguided notions of the separation of powers makes this book even more exciting.”—Benjamin Kleinerman, author of The Discretionary President

“In The Myth of Coequal Branches David Siemers shows how our contemporary platitude about equally powerful branches obscures the function of each branch, expands presidential power, encourages gridlock, and allows Congress to abdicate its constitutional responsibilities. This is a well-researched, persuasively argued, and important book.”—James H. Read, author of Power versus Liberty: Madison, Hamilton, Wilson, and Jefferson

"In allocating powers, the Founders intended to preserve the integrity of each branch, not equalize powers between them.  The branches are equally legitimate, if differentially so, but not co-equal, as is so frequently stated, often to serve partisan advantages.  Indeed, the concept of co-equality lacks “explanatory validity” constitutionally, historically, and practically.  David J. Siemers tackles these matters in his well-conceived and clearly composed book, The Myth of Co-Equal Branches: Restoring the Constitution’s Separation of Functions.
Siemers offers a job analysis of the branches, proposing the “separation of functions” as a practical substitute for the “separation of powers.”  That shift is no mere syntactical or compositional nit-picking.  Rather it offers a more exact conceptual basis for testing our government by the intentions of the Founders, setting aside contemporary branch equality generalizations.  As he explains: “Each branch has a different job.”  The “separation of functions model would allow…each branch…to do its own distinctive work.”   The book is an elegant and persuasive correction to core mythical assertions about our separated system of governing.  It will be welcomed as provocative classroom and seminar constitutional analysis."—Charles O. Jones, Hawkins Professor Emeritus of Political Science, University of Wisconsin-Madison

“The Myth of Coequal Branches brings vigor to different strands of social science research and opens a window for scholarly advancement on multiple fronts.”—Political Science Quarterly