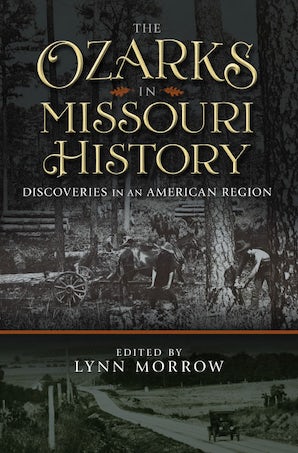 Interest in scholarly study of the Ozarks has grown steadily in recent years, and The Ozarks in Missouri History: Discoveries in an American Region will be welcomed by historians and Ozark enthusiasts alike. This lively collection gathers fifteen essays, many of them pioneering efforts in the field, that originally appeared in the Missouri Historical Review, the journal of the State Historical Society.

In his introduction, editor Lynn Morrow gives the reader background on the interest in and the study of the Ozarks. The scope of the collection reflects the diversity of the region. Micro-studies by such well-known contributors as John Bradbury, Roger Grant, Gary Kremer, Stephen Limbaugh Sr., and Milton Rafferty explore the history, culture, and geography of this unique region. They trace the evolution of the Ozarks, examine the sometimes-conflicting influences exerted by St. Louis and Kansas City, and consider the sometimes highly charged struggle by federal, state, and local governments to define conservation and the future of Current River.
Authors and Editors
Lynn Morrow is the former Director of the Local Records Preservation Program, Missouri State Archives. He is the author or editor of three books, including Shepard of the Hills Country: Tourism Transforms The Ozarks. He lives in Jefferson City, Missouri.
Praise For This Book

"The next best thing to an opportunity for a road trip through the Ozarks...is to own a copy of The Ozarks in Missouri History."--Don Culliamore, Boone's Lick Heritage Quarterly