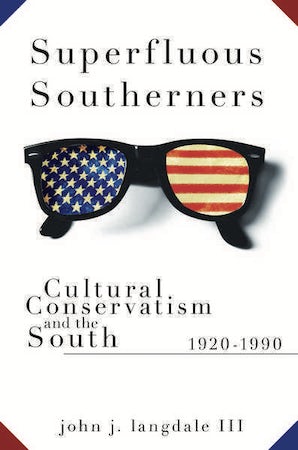 About This Book
In Superfluous Southerners, John J. Langdale III tells the story of traditionalist conservatism and its boundaries in twentieth-century America. Because this time period encompasses both the rise of the modern conservative movement and the demise of southern regional distinctiveness, it affords an ideal setting both for observing the potentiality of American conservatism and for understanding the fate of the traditionalist “man of letters.” Langdale uses the intellectual and literary histories of John Crowe Ransom, Donald Davidson, and Allen Tate—the three principal contributors to the Agrarian manifesto I’ll Take My Stand—and of their three most remarkable intellectual descendants—Cleanth Brooks, Richard Weaver, and Melvin Bradford—to explore these issues.
Langdale begins his study with some observations on the nature of American exceptionalism and the intrinsic barriers which it presents to the traditionalist conservative imagination. While works like Louis Menand’s The Metaphysical Club have traced the origins of modern pragmatic liberalism during the late nineteenth century, the nature of conservative thought in postbellum America remains less completely understood. Accordingly, Langdale considers the origins of the New Humanism movement at the turn of the twentieth century, then turning to the manner in which midwesterners Irving Babbitt and Paul Elmer Moore stirred the imagination of the Southern Agrarians during the 1920s.
After the publication of I’ll Take My Stand in 1930, Agrarianism splintered into three distinct modes of traditionalist conservatism: John Crowe Ransom sought refuge in literary criticism, Donald Davidson in sectionalism, and Allen Tate in an image of the religious-wayfarer as a custodian of language. Langdale traces the expansion of these modes of traditionalism by succeeding generations of southerners. Following World War II, Cleanth Brooks further refined the tradition of literary criticism, while Richard Weaver elaborated the tradition of sectionalism. However, both Brooks and Weaver distinctively furthered Tate’s notion that the integrity of language remained the fundamental concern of traditionalist conservatism.
Langdale concludes his study with a consideration of neoconservative opposition to M.E. Bradford’s proposed 1980 nomination as head of the National Endowment for the Humanities and its significance for the southern man of letters in what was becoming postmodern and postsouthern America. Though the post–World War II ascendance of neoconservatism drastically altered American intellectual history, the descendants of traditionalism remained largely superfluous to this purportedly conservative revival which had far more in common with pragmatic liberalism than with normative conservatism.
John J. Langdale III is Assistant Professor of History at Andrew College and lives in Eufaula, Alabama.
Authors and Editors

Jay Langdale received his BA from Mercer University, his MA from the Southern Studies Program at the University of Mississippi and his PhD from the University of Florida where he studied under Bertram Wyatt-Brown. His areas of interest include the American South, American Intellectual History and the role of the “man of letters” in American and Western thought. He has recently presented papers on the evolution of Richard Weaver's traditionalist conservative imagination and on the uses of Charles Taylor’s Sources of the Self as a means to understand the modern Southern literary imagination.

Dr. Langdale has taught at Troy University, Andrew College, the University of Florida and Virginia Wesleyan College. His teaching interests extend from surveys of World and United States History to seminars on the American South, The Civil War and Reconstruction, American Intellectual History and Historical Methods/Historiography. He lives in Eufaula, Alabama.

“The tradition of intellectual dissent in America has long been associated with the political Left, but in his book Superfluous Southerners: Cultural Conservatism and the South, 1920-1990, John J. Langdale III recovers a powerful tradition of dissent in the twentieth-century Right. He argues that six Southern Agrarian intellectuals—Allen Tate, John Crowe Ransom, Donald Davidson, Cleanth Brooks, Richard M. Weaver, and M. E. Bradford—offered a critique of modernity that opposed American materialism, conformism, industrialism, and, especially, gnosticism—the hubris that humans can remold the world without limits.”—Journal of Southern History

“Although brief, this is an elegantly crafted history of this particular aspect of southern intellectualism during a significant 70-year span.”—M. Daniel, Piedmont, CHOICE

“John Langdale’s Superfluous Southernerssignificantly contributes to our understanding of not only a particular group of writers and the principles which united them, but also the political, historical and cultural era in which they wrote. Many scholars will find this study useful in their own work on this period and also a great aid toward helping them to understand better the development of conservative ideas in America during the first half of the twentieth-century.”—W. Wesley McDonald, author of Russell Kirk and the Age of Ideology

“John J. Langdale III has produced a well-written, thought-provoking monograph that examines the oft-debated relationship between twentieth-century southern cultural conservatives and their mainstream political counterparts.”—Thomas A. Underwood, The Journal of American History