A Settlement of Hanoverian Germans in Western Missouri 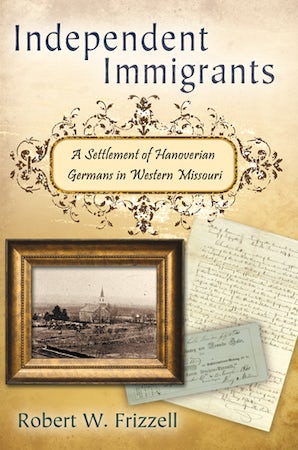 Between 1838 and the early 1890s, German peasant farmers from the Kingdom of Hanover made their way to Lafayette County, Missouri, to form a new community centered on the town of Concordia. Their story has much to tell us about the American immigrant experience—and about how newcomers were caught up in the violence that swept through their adoptive home.

Robert Frizzell grew up near Concordia, and in this first book-length history of the German settlement, he chronicles its life and times during those formative years. Founded by Hanoverian Friedrich Dierking—known as “Dierking the Comforter” for the aid he gave his countrymen—the Concordia settlement blossomed from 72 households in 1850 to 375 over the course of twenty years. Frizzell traces that growth as he examines the success of early agricultural efforts, but he also tells how the community strayed from the cultural path set by its freethinker founder to become a center of religious conservatism.

Drawing on archival material from both sides of the Atlantic, Frizzell offers a compelling account for scholars and general readers alike, showing how Concordia differed from other German immigrant communities in America. He also explores the conditions in Hanover—particularly the village of Esperke, from which many of the settlers hailed—that caused people to leave, shedding new light on theological, political, and economic circumstances in both the Old World and the New.

When the Civil War came, the antislavery Hanoverians found themselves in the Missouri county with the greatest number of slaves, and the Germans supported the Union while most of their neighbors sympathized with Confederate guerrillas. Frizzell tells how the notorious “Bloody Bill” Anderson attacked the community three times, committing atrocities as gruesome as any recorded in the state—then how the community flourished after the war and even bought out the farmsteads of former slaveholders.

Frizzell’s account challenges many historians’ assumptions about German motives for immigration and includes portraits of families and individuals that show the high price in toil and blood required to meet the challenges of making a home in a new land. Independent Immigrants reveals the untold story of these newcomers as it reveals a little-known aspect of the Civil War in Missouri.

Authors and Editors
Robert W. Frizzell is Director of Libraries at Northwest Missouri State University and lives in Maryville.