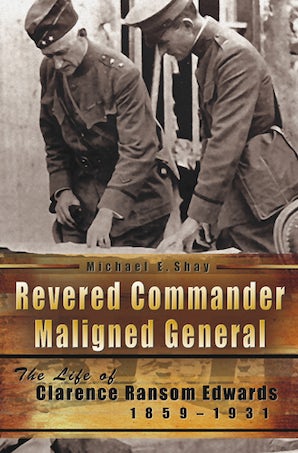 About This Book
Major General Clarence Ransom Edwards is a vital figure in American military history, yet his contribution to the U.S. efforts in World War I has often been ignored or presented in unflattering terms. Most accounts focus on the disagreements he had with General John J. Pershing, who dismissed Edwards from the command of the 26th (“Yankee”) Division just weeks before the war's end. The notoriety of the Pershing incident has caused some to view Edwards as simply a “political general” with a controversial career. But Clarence Edwards, though often a divisive figure, was a greater man than that. A revered and admired officer whose men called him “Daddy,” Edwards attained an impressive forty-year career, one matched by few wartime leaders.
Michael E. Shay presents a complete portrait of this notable American and his many merits in Revered Commander, Maligned General. This long-overdue first full-length biography of General Clarence Edwards opens with his early years in Cleveland, Ohio and his turbulent times at West Point. The book details the crucial roles Edwards filled in staff and field commands for the Army before the outbreak of World War I in 1917: Adjutant-General with General Henry Ware Lawton in the Philippine-American War, first chief of the Bureau of Insular Affairs, and commander of U.S. forces in the Panama Canal Zone. Revered Commander, Maligned General follows Edwards as he forms the famous Yankee Division and leads his men into France. The conflict between Edwards and Pershing is placed in context, illuminating the disputes that led to Edwards being relieved of command.
This well-researched biography quotes a wealth of primary sources in recounting the life of an important American, a man of loyalty and service who is largely misunderstood. Photographs of Edwards, his troops, and his kin—many from Edwards’ own collection—complement the narrative.  In addition, several maps aid readers in following General Edwards as his career moves from the U.S. to Central America to Europe and back stateside. Shay’s portrayalof General Edwards finally provides a balanced account of this unique U.S. military leader.
Authors and Editors

Michael E. Shay is a Senior Superior Court Judge in Connecticut. He has had a lifelong interest in American history, particularly the story of the 26th “Yankee” Division in World War I. His other books include Sky Pilots: The Yankee Division Chaplains in World War I and A Civilian in Lawton’s 1899 Philippine Campaign: The Letters of Robert D. Carter, both published by the University of Missouri Press.

“Clarence Edwards, World War I commander of the 26th National Guard Division is generally listed among the AEF generals found professionally wanting by General Pershing. Shay's nuanced and balanced account instead presents the ambitious and outspoken Edwards as having incurred Pershing's dislike well before the war—a dislike Pershing also felt for a Guard he considered ‘Boy Scouts.’ Edwards's dismissal epitomizes a century of friction between Guard and regulars that at times obscured their common status as citizen soldiers of a democratic republic.”—Dennis E. Showalter, author of Tannenberg: Clash of Empires, 1914

“This biography sheds much-needed light on the wartime service of Clarence Ransom Edwards, and it comprehensively portrays his extensive military career from his graduation at West Point to his service in World War I. Undoubtedly this book will cause some debate because it is the first in-depth examination of  Edwards’ controversial relationship with Black Jack Pershing.”—James J. Cooke, author of  Pershing and His Generals: Command and Staff in the AEF