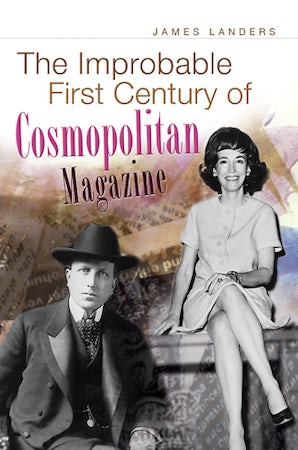 About This Book
Today, monthly issues of Cosmopolitan magazine scream out to readers from checkout counters and newsstands. With bright covers and bold, sexy headlines, this famous periodical targets young, single women aspiring to become the quintessential “Cosmo girl.” Cosmopolitan is known for its vivacious character and frank, explicit attitude toward sex, yet because of its reputation, many people don’t realize that the magazine has undergone many incarnations before its current one, including family literary magazine and muckraking investigative journal, and all are presented in The Improbable First Century of Cosmopolitan Magazine. The book boasts one particularly impressive contributor: Helen Gurley Brown herself, who rarely grants interviews but spoke and corresponded with James Landers to aid in his research.
When launched in 1886, Cosmopolitan was a family literary magazine that published quality fiction, children’s stories, and homemaking tips. In 1889 it was rescued from bankruptcy by wealthy entrepreneur John Brisben Walker, who introduced illustrations and attracted writers such as Mark Twain, Willa Cather, and H. G. Wells. Then, when newspaper magnate William Randolph Hearst purchased Cosmopolitan in 1905, he turned it into a purveyor of exposé journalism to aid his personal political pursuits. But when Hearst abandoned those ambitions, he changed the magazine in the 1920s back to a fiction periodical featuring leading writers such as Theodore Dreiser, Sinclair Lewis, and William Somerset Maugham. His approach garnered success by the 1930s, but poor editing sunk Cosmo’s readership as decades went on. By the mid-1960s executives considered letting Cosmopolitan die, but Helen Gurley Brown, an ambitious and savvy businesswoman, submitted a plan for a dramatic editorial makeover. Gurley Brown took the helm and saved Cosmopolitan by publishing articles about topics other women’s magazines avoided. Twenty years later, when the magazine ended its first century, Cosmopolitan was the profit center of the Hearst Corporation and a culturally significant force in young women’s lives.
The Improbable First Century of Cosmopolitan Magazine explores how Cosmopolitan survived three near-death experiences to become one of the most dynamic and successful magazines of the twentieth century. Landers uses a wealth of primary source materials to place this important magazine in the context of history and depict how it became the cultural touchstone it is today. This book will be of interest not only to modern Cosmo aficionadas but also to journalism students, news historians, and anyone interested in publishing.
Authors and Editors
James Landers is Associate Professor in the Department of Journalism and Technical Communications at Colorado State University. He is the author of The Weekly War: Newsmagazines and Vietnam (University of Missouri Press).
Praise For This Book

"There's more to a magazine than its racy cover lines, as James Landers demonstrates in this meticulously researched history of Cosmopolitan.  Its varied incarnations as middle-class companion, muckraking crusader, literary bellwether, and oracle of the sexual revolution demonstrates the power of personality in publishing as well as the medium's extraordinary adaptability."—Linda Lumsden, author of Inez: The Life and Times of Inez Milholland

“The book’s twin strengths are its depth of primary-source research and its engaging narrative.  The research includes archival materials such as the papers of William Randolph Hearst and Helen Gurley Brown as well as interviews and correspondence with Brown and others. Individual chapters draw the reader right in with attention-getting storytelling.”
—Nancy L. Roberts, coauthor of The Press and America: An Interpretive History of the Mass Media