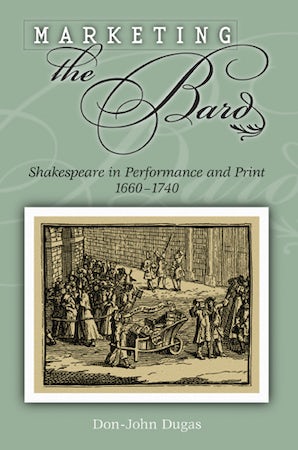 To posterity, William Shakespeare may be the Bard of Avon, but to mid-seventeenth-century theatergoers he was just another dramatist. Yet barely a century later, he was England’s most popular playwright and a household name. In this intriguing study, Don-John Dugas explains how these changes came about and sealed Shakespeare’s reputation even before David Garrick performed his work on the London stage.

Marketing the Bard considers the ways that performance and publication affected Shakespeare’s popularity. Dugas takes readers inside London’s theaters and print shops to show how the practices of these intersecting enterprises helped transform Shakespeare from a run-of-the-mill author into the most performed playwright of all time—persuasively demonstrating that by the 1730s commerce, not criticism, was the principal force driving Shakespeare’s cultural dominance.
Displaying an impressive command of theater and publishing history, Dugas explains why adaptations of Shakespeare’s plays succeeded or failed on the stage and shows that theatrical and publishing concerns exerted a greater influence than aesthetics on the playwright’s popularity. He tells how revivals and adaptations of Shakespeare’s plays while he was relatively unknown fueled an interest in publication—exploited by the Tonson publishing firm with expensive collected editions marketed to affluent readers—which eventually led to competition between pricey collections and cheap single-play editions. The resulting price war flooded the market with Shakespeare, which in turn stimulated stage revivals of even his most obscure plays.
In tracing this curious reemergence of Shakespeare, Dugas considers why the Tonsons acquired the copyright to the plays, how the famous edition of 1709 differed from earlier ones, and what effect its publication had on Shakespeare’s popularity. He records all known performances of Shakespeare between 1660 and 1705 to document productions by various companies and to show how their performances shaped the public’s taste for Shakespeare. He also discloses a previously overlooked eighteenth-century engraving that sheds new light on the price war and Shakespeare’s reputation.
Marketing the Bard is a thoroughly engaging book that ranges widely over the Restoration landscape, containing a wealth of information and insight for anyone interested in theater history, the history of the book, the origins of copyright, and of course Shakespeare himself. Dugas’s analysis of the complex factors that transformed a prolific playwright into the inimitable Bard clearly shows how business produces and packages great art in order to sell it.
Authors and Editors

Don-John Dugas is Assistant Professor of English and Fellow of the Institute for Bibliography and Editing at Kent State University. He lives in Cuyahoga Falls, Ohio. 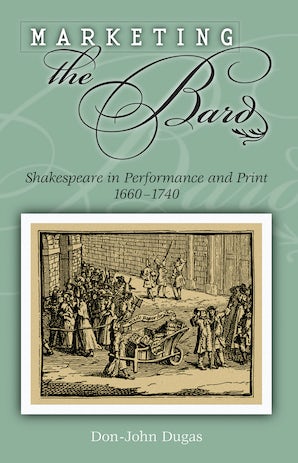