Humorous Writing from Longstreet to Twain 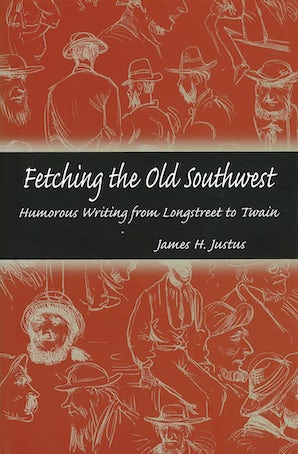 About This Book
For more than a quarter-century, despite the admirable excavations that have unearthed such humorists as John Gorman Barr and Marcus Lafayette, the most significant of the humorists from the Old Southwest have remained the same: Crockett, Longstreet, Thompson, Baldwin, Thorpe, Hooper, Robb, Harris, and Lewis. Forming a kind of shadow canon in American literature that led to Mark Twain’s early work, from 1834 to 1867 these authors produced a body of writing that continues to reward attentive readers.
James H. Justus’s Fetching the Old Southwest examines this writing in the context of other discourses contemporaneous with it: travel books, local histories, memoirs, and sports manuals, as well as unpublished private forms such as personal correspondence, daybooks, and journals. Like most writing, humor is a product of its place and time, and the works studied herein are no exception. The antebellum humorists provide an important look into the social and economic conditions that were prevalent in the southern “new country,” a place that would, in time, become the Deep South.
Justus’s study focuses mainly on the humor from the area categorized in the federal censuses of the mid-nineteenth century as the Southwest: Alabama, Mississippi, Louisiana, Kentucky, Tennessee, and, eventually, Arkansas and Texas. Where it is pertinent, he also includes North Carolina and Missouri in this cultural map. Although some of these pieces may not precisely reflect their cultural setting, they are assuredly refractions of it.
While previous books about Old Southwest humor have focused on individual authors, Justus has produced the first critical study to encompass all of the humor from this time period. Teachers and students of literary history will appreciate the incredible range of documentation, both primary and secondary.
Authors and Editors

James H. Justus is Distinguished Professor of English Emeritus at Indiana University in Bloomington. He is the author of The Achievement of Robert Penn Warren.

"Fetching the Old Southwest is by every measure a major achievement, the work of a distinguished Americanist thinking and writing at the top of his game. James H. Justus has produced a book that will become the touchstone for all future investigations in the area."—William Bedford Clark

"James Justus has written a splendid book. It is and will be the standard book on what we have come to call the `humorists' of the Old Southwest. This book is a delight to read."—James Cox

Humorous Writing from Longstreet to Twain