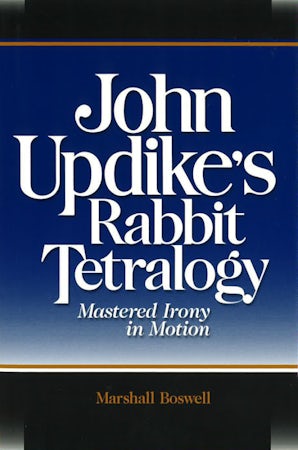 Early in his career, John Updike announced his affinity with the Christian existentialism of Soren Kierkegaard, Paul Tillich, Karl Barth, and others. Because of this, many of Updike's critics have interpreted his work from within a Christian existentialist context. Yet Kierkegaard and Barth provide Updike with much more than a mere context, for their dialectical thinking serves as the springboard for Updike's own unique dialectical vision, a complex matrix of ethical precepts, theological beliefs, and aesthetic principles that governs nearly all of his literary output. Nowhere else in his immense corpus is this vision more clearly and thoroughly expressed than in his four Rabbit novels, which were gathered into the single volume Rabbit Angstrom in 1995. However, because Updike's critics have chosen to read the Rabbit novels as discrete, freestanding texts, they have by and large failed to extract the precepts of this private vision.

In John Updike's Rabbit Tetralogy, Marshall Boswell redresses this imbalance by treating the Rabbit tetralogy as a single, unified "mega-novel." He demonstrates that, taken together as a single work, the four discrete sections of the tetralogy not only provide a coherent and complete articulation of Updike's unique existential vision but also compose a unified work of remarkable formal complexity. Boswell brings to Updike's work the concept of "mastered irony," a term coined by Kierkegaard to describe the presentation of two legitimate but contradictory sides of an issue. In the Rabbit novels, these issues range from adultery to drug addiction, from race to redemption, with each issue examined through the refracting lens of Updike's own ironic method. Boswell shows that although each of the four individual Rabbit novels confirms this dialectical strategy in a unique way, the completed tetralogy comprises an additional series of dialectical pairs that sustain, rather than resolve, thematic and formal tension. Ultimately, the structure of the finished "mega-novel" echoes the work's thematic rationale.

To help readers who are interested in a particular Rabbit novel, Boswell devotes a chapter to each individual section of the tetralogy. At the same time, he treats each novel as an integral part of the more comprehensive whole. Honoring the full complexity of Updike's provocative thinking without losing sight of the tetralogy's popular appeal, John Updike's Rabbit Tetralogy makes a valuable addition to the study of Updike's work.

Marshall Boswell is Assistant Professor of English at Rhodes College in Memphis, Tennessee.